If you have been watching the news lately, you probably have been hearing stories about the state of the Markets which have been very volatile indeed.  As the chart below indicates, The Dow Jones Industrial Average is down almost 7% and the S&P 500 is down almost 10% since the start of 2022. 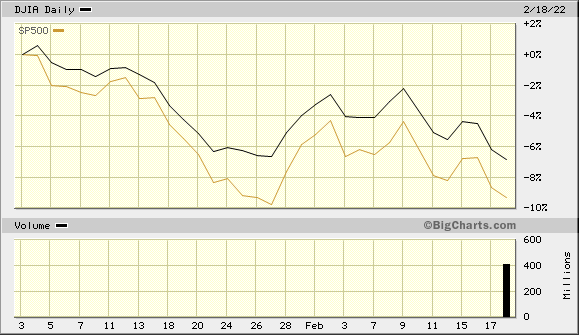 The decline in the Markets can be attributed directly to inflation and the steps being taken to slow it down:  raising interest rates.  In 2021 consumer spending began to steadily rise.  However due to shortages in labor, electrical components, and other materials, supplies of consumer goods could not keep up with demand.  Whenever too much money is chasing too few goods, prices begin to rise and that is what happened in the later part of 2021.  In November of 2021, the annual consumer price index (a measure of inflation) surged to 6.8% which is the largest 12 month increase since 1982.  The energy sector contributed the most to inflation in 2021.  As more people began to get out and drive more, they consumed more gasoline, which lead to increased prices at the pump.  The price of gas rose almost 59% in 2021.  The lack of computer chips has also contributed greatly to the gap between supply and demand.  When the global economy shut down due to Covid-19 in 2020, the demand for consumer electronics shot up while the demand for automobiles went down.  The computer chips naturally went towards home electronics.  However, as demand for automobiles began to ramp up, computer chip manufacturers couldn’t shift gears fast enough and pivot to making chips for automobiles.  This caused the supply chain back up which in turn is driving up the cost of new automobiles.  With so few new automobiles available, people are turning to used cars which is driving up the cost to buy a used car as well.  Inflation as you can see, can be like a snowball rolling down a mountainside.

To help slow the momentum of this inflation snowball, the Federal Reserve announced that it will begin raising interest rates next month.  Raising rates means the Federal Reserve will raise the federal funds rates which is the rate that is charged to banks for overnight borrowing.  Banks need to have a certain amount of money at all times so they borrow from the Federal Reserve.  Banks in turn pass on their increased costs to consumers by raising the interest rate that people pay for credit cards, auto loans, home mortgage loans, etc.  Markets react poorly to interest rate hikes as it can result in a stalled economy down the road.

Inflation has impacted the bond market as well.  As inflation rises, the cost of borrowing does also which is reflected in the bond interest rate.  As interest rates rises, bond prices fall.  People who own individual bonds, bond mutual funds, or bond ETF’s have seen a decrease in the value of their investments also. The impact of this decline in value is proportional to the term of the bond.  The longer the term of your bond, the greater the decline in your bond value.  The good news with individual bonds is that if you do not sell and hold them until maturity, you will receive your full principal back plus the interest that you’ve earned along the way.  If you own short term to intermediate term bond funds, they will eventually go back to positive territory as long as you hold the bond fund according to it’s intended time frame.  Remember bond funds / ETFs in long-term investment portfolios act as a diversifier and reduces the overall risk to your investment portfolio.

Besides the impact of inflation and rising interest rates, global tension with Russia and the Ukraine is another troublesome area that the Markets are worrying about.  The cost of a barrel of oil is about $94 a barrel and Russia is the third largest oil producer in the world.  If war breaks out, the flow of oil from Russia can be reduced greatly which will further increase the cost of oil per barrel, which increases the cost of gasoline.  Higher gasoline prices, means higher inflation, which leads to a slower economy.

In a nutshell stocks and bonds are falling so it doesn’t look like there seems to be any relief in sight.  Furthermore, the threat of war is adding further instability to an already unstable situation.  What are we to do about all of this?  Understand that to be invested in the Markets means to be invested for the long-term.  History has shown that those who are patient will be rewarded in the long run with positive returns.  Understand that Markets will go down.  In times like these Markets can go down quite a bit.  The best thing we can do is to remain calm, acknowledge that there are short-term risks, remain broadly diversified, and stay true to our long term investment objectives.

Money that is needed today and over the next 5 years are invested very little in the stock market.  The reason we do not invest heavily in the stock market for goals shorter than five years, is because as the chart below shows, significant market declines of 40% or more takes almost 58 months or five years to recover.

Every time bad things happen it can seem like it’s the only time it has happened to us.  However, as the chart above shows, corrections and downturns do happen quite often.  When it does it does not last long.  With that said, be prepared for continued rough investing waters for the next few months; especially as the conflict with Ukraine is the big unknown variable.   Hopefully the 3rd and 4th quarter of 2022 will bring calm to the Markets.

This content is developed from sources believed to be providing accurate information, and provided by Attune Financial Planning. The opinions expressed and material provided are for general information only.  Please consult your financial, tax, and estate planning professional regarding your specific situation.