In August of this year, the House of Representatives approved a roughly $3.5 trillion budget, which opened a parliamentary procedure known as budget reconciliation, a procedure used to pass the American Rescue Plan Act back in March.

This past week, the House Ways and Means Committee released legislative text that offers tax revenue increases of up to $2.9 trillion to offset the expenses in the budget. The next step will be for congress to debate and negotiate the provisions in the bill.  In order to move the bill forward through the House of Representatives and the Senate, the Democrats in Congress will need to remain united as Republicans are not expected to support any part of the proposed tax bill.

While it is certainly possible that the specifics will change if the final bill passes, here are the major tax revenue proposals which will impact wealthy individuals and corporations the most:

One of the centerpieces of the bill is a return of the top ordinary income tax bracket to 39.6%. This had been the top rate from 2013 through 2017, but was reduced to 37% beginning in 2018 with the enactment of the Tax Cuts and Jobs Act (of 2017). If enacted, the current bill would ‘permanently’ reinstall 39.6% as the top ordinary income tax rate, beginning in 2022.  In the chart below you can see that this increase will primarily impact singles and those who are Married Filing Jointly with incomes greater than $400,000 and $450,000 respectively.  However, people below this income will not see any changes to their tax rates. 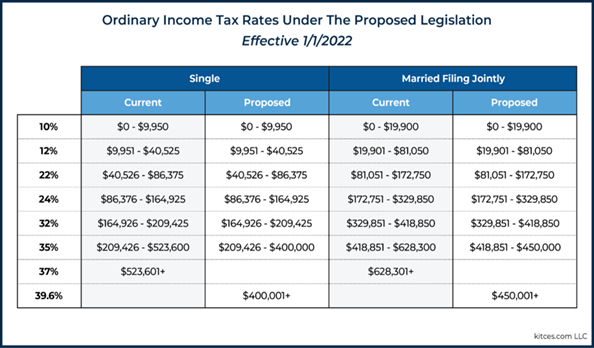 Imposing a 3% surtax on individuals’ income above $5 million

Section 138206 of the proposal would create a new 3% surtax on ultra-high-income taxpayers. The additional 3% rate would apply to single and married filing jointly taxpayers whose adjusted gross income to the extent it exceeds $5 million.

There are also some changes to the retirement tax code for wealthy investors. The first prohibits individuals earning more than $400,000 a year with individual retirement accounts (IRAs) and 401(k)-style retirement accounts whose balances exceed $10 million from contributing more money to these funds. Those investors would also have a new required minimum distribution each year.

Second, the bill prohibits those earning more than $400,000 a year from converting individual retirement accounts (IRAs) and 401(k)-type plans into Roth IRA accounts, and eliminates the “mega-backdoor Roth” strategy completely. These strategies are often used by wealthy investors to pay less taxes on investments.

The flat corporate tax of 21% will be replaced with:

Reduction In The Unified Credit Amount For Estate And Gift Taxes

With the passing of the Tax Cuts and Jobs Act, roughly four years ago, the unified estate and gift tax exemption was doubled from (an inflation-adjusted) $5 million to $10 million, beginning in 2018.  Although that change was scheduled to sunset automatically at the end of 2025, the proposed bill accelerates that timeframe, reducing the exemption amount back to (an inflation-adjusted) $5 million for 2022 and future years (expected to be about $6 million in 2022 after inflation adjustments).

Since the Tax Cut and Jobs Act, those who itemize deductions can no longer write off more than $10,000 for property and state income taxes on their federal return.  While the Ways and Means Committee didn’t address SALT in its package of tax proposals, a repeal of the SALT deduction limitation is not out of the question and could make it in the final version of the final tax bill.

If Democrats are able to remain unified, there is a good chance that we will see significant changes in the tax code fairly soon.  These changes will impact tax payers whose income is greater than $400,000 the most.  If you are a high-income earner, accelerating income into 2021, deferring tax deductions into 2022, pursuing Roth conversions, and gifting assets might be potential tax planning strategies worth considering.

This content is developed from sources believed to be providing accurate information, and provided by Attune Financial Planning.  Please consult legal or tax professionals for specific information regarding your individual situation. The opinions expressed and material provided are for general information only.